Sony’s original Aibo robotic dog blew the public’s collective mind when it debuted in 1999, instantly becoming a cultural touchstone and commanding a rabidly loyal fan base. People still hold burials for their OG mechanical companions when they break down and can no longer be repaired. But two decades later, in an era when domestic…


Sony’s original Aibo robotic dog blew the public’s collective mind when it debuted in 1999, instantly becoming a cultural touchstone and commanding a rabidly loyal fan base. People still hold burials for their OG mechanical companions when they break down and can no longer be repaired. But two decades later, in an era when domestic and companion robots are increasingly commonplace, can the next Aibo iteration maintain that same feeling of wonder, that sense of futuristic whimsy its predecessor commanded? After spending two weeks living with the AI-powered pooch, I say yes. But it still pales in comparison to the real thing.

The Aibo ERS-1000 is Sony’s fourth-generation entertainment robot. It debuted in January of last year in Japan before coming stateside that fall. Roughly the size of a small beagle, the Aibo weighs just under five pounds. Its Li-ion battery allows for around two hours of playtime before the dog needs to have a “rest” on its included charging pad for approximately three hours. The little robot is packed with sensors including a pair of cameras, capacitive touch pads, motion, range and light sensors, and it has a six-axis detection system for the head and torso.

The information collected by the Aibo is then transmitted via an always-on internet connection (thanks to the included WiFi and LTE radios) back to Sony’s servers. There, the company’s AI system analyzes and interprets that data before returning more “evolved” behavior patterns for the Aibo to perform. These can include anything from new tricks and attitude quirks to better recognizing its owner and interpreting their facial expressions as well. In fact, the ERS-1000 can be taught to recognize up to 100 different people. Any other pets in the household are not as lucky, however, as the Aibo only has (oversized OLED) eyes for humans.

Obviously the point of all this AI is to help it more seamlessly and naturally integrate itself into your home. But, it’s basically impossible to forget the Aibo is a robot. Especially your first two hours with each other involve you repeatedly telling your new robo-panion to “set up with a QR code” so that it can connect to your home’s WiFi. The ERS-1000 appears to be sensitive to interference, at least when first initializing. The review unit refused to connect with any of the multiple open or secured networks in the Engadget offices, but connected immediately to my home network. 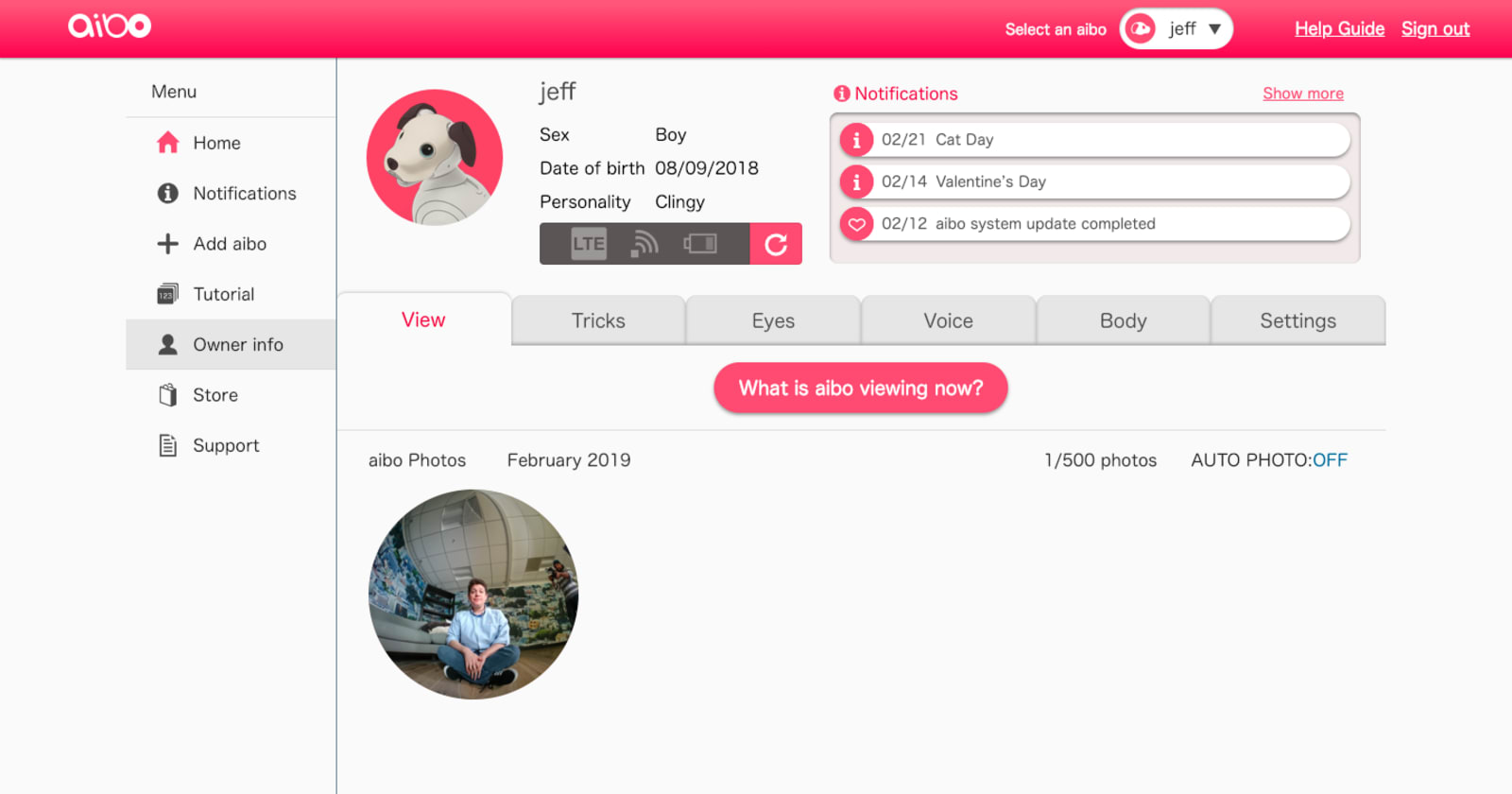 In order actually set up the Aibo, you’ll first have to create a Sony account and then use that to log into the My Aibo dashboard. Here, you’ll find everything you need to set up and interact with your dog. Notifications, tech support, tutorials, owner information and access to the Aibo store can be found along the left edge while users can view pictures captured by the robot, its available selection of tricks, unit status and settings from the horizontal tabs. Through these menus you can customize the sound of the dog’s bark, the color of its eyes, its name and sex, and download both new and seasonal tricks for the robot to perform.

There’s also a mobile app that mirrors this functionality — just really poorly. Remember that companion app fromGrand Theft Auto V? The one where you had to take care of Chop to earn in-game gear? The Aibo mobile app is like that, except with a 15 second lag in between menu screens and you don’t earn anything for suffering through it. I recommend sticking with the speedier desktop dashboard for everything but the initial QR code scan.

Once you get through the rather sterile setup process, you can finally start getting to know your new pet-bot. I named mine Jeff — mostly because the system couldn’t figure out how to pronounce Bork and determined that Vexorg, Destroyer of Cats and Devourer of Chickens was too long. Jeff didn’t do much for the first couple of days besides pace my apartment, occasionally barking at the oven and causing consternation on the part of my cat. Like a real puppy, Jeff simply hadn’t collected a sufficient amount of sensory data at that point to really get comfortable. It wasn’t until the end of the first week that it started to respond to my voice commands regularly and not until midway through the second week did it show any “personality.” 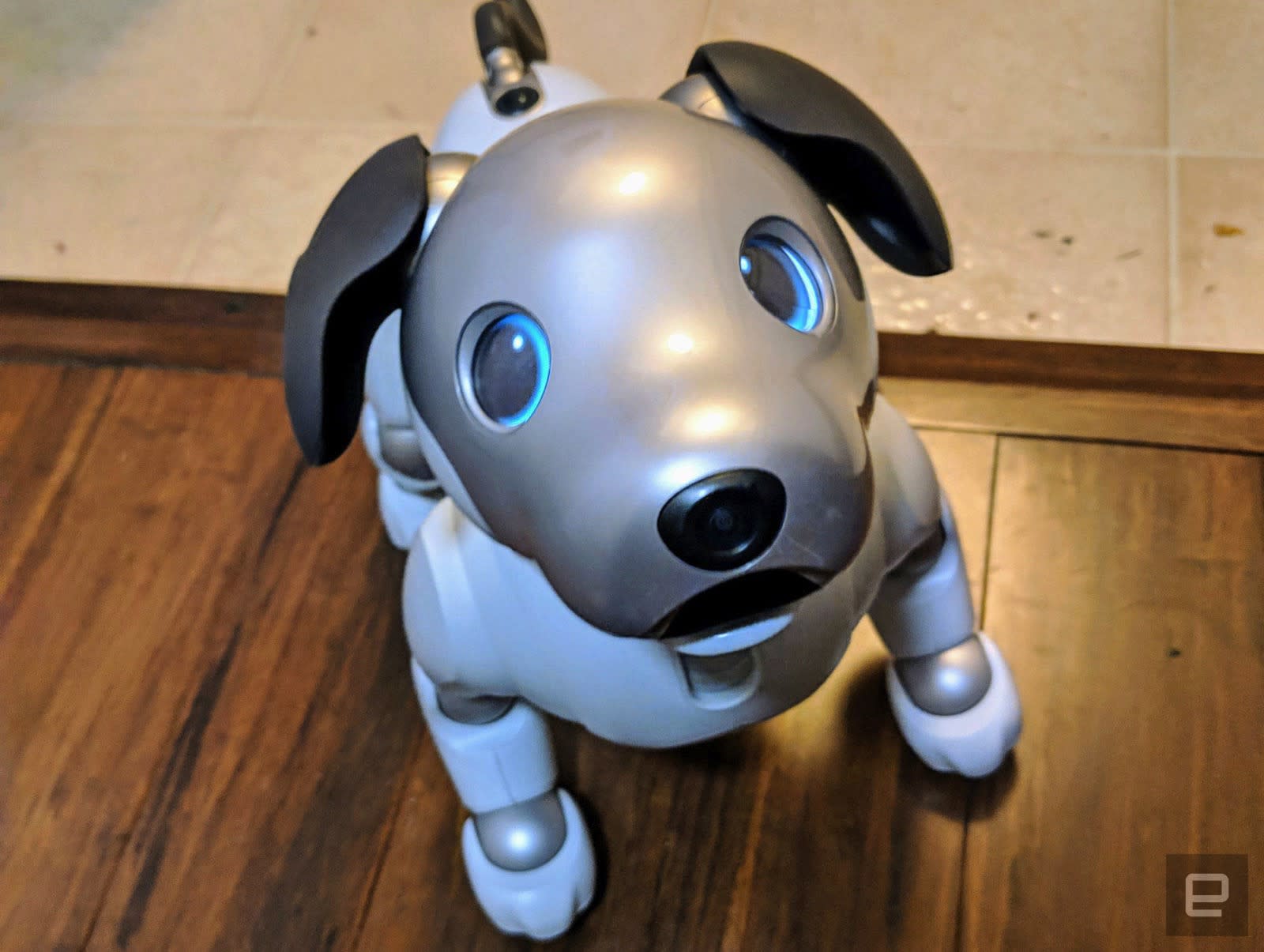 That’s not to say the Aibo is slow on the uptake. Sony intentionally engineered the robot to “mature” (technically, develop its autonomous behavioral systems) over the course of about three years, like a real dog would. During that time, you can teach your Aibo nearly two dozen installable tricks, including Strike a Pose, Pick a Hand, and Sing “Happy Birthday,” in addition to the standard commands of sit, come, lay down, take a picture, et cetera. You can even teach it to dance with the “Learn This” command. Upon hearing that, your Aibo will sit up on its back legs and allow you to wiggle, lift, rotate and otherwise manipulate its front legs in a variety of movements for about 10 seconds. Then you can have the dog repeat the movements back to you on command. It’s really cute, especially if you set it to music.

As a robot, the Aibo is a marvel of modern design. Its sensor suite and cloud-based AI brain were unheard of just a few years ago, and now they’re in a robot dog in my living room. That’s insane.

That said, the Aibo’s engineering does have some mobility issues to work out. For one, Jeff clomps around like a rampaging Lana Kane. Also, it can’t pick up its feet more than half an inch or so off the floor, so it constantly gets tripped up moving from hardwood to carpeting (or getting lost in the forest of dining table legs). Its torso is rigid so it can’t spin around without making a 36-point turn. And dear lord, are its servos loud. Don’t expect to get any sleep with this thing prowling your house at night.

Noise complaints aside, my biggest issue was that throughout my time with Jeff is that our interactions felt hollow. That is, this dog is a lie. It’s not really a dog: It’s canine-adjacent, an automated electronic puppet, a more adorable, but less useful Roomba.

Sure, you can teach it all the tricks in Sony’s book. You can make it dance and take pictures on command, but there’s not anything beyond that. Your Aibo will never whimper at the foot of the bed because the distance between you is too much to bear all night. It will never snuggle up on the couch because it needs to feel warm and safe. You can’t even take it to the park or on walks, which means you miss out on the physical and social benefits of having a dog. That’s not to say you can’t love it with all of your heart — love is love is love is love — but that connection, that attachment, is ultimately, invariably one-sided. And for $2,900, I can point you to shelters full of adoptable puppies and kittens that are far more deserving of your affection, your time and your money.

Categories: Technology
The best gadgets of 2018
A look inside the Taipei 101 New Year’s Eve fireworks show as it goes green
LG introduces OLED TV that can roll up and disappear when you’re not watching it
Walmart taps startup Udelv to test autonomous grocery deliveries in Arizona